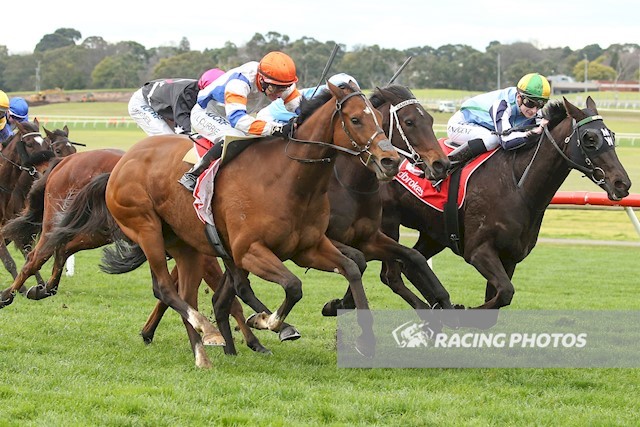 Improving stayer Quaffany is showing the benefit of maturity making it two wins in a row coming from last at Sandown on Wednesday, August 14.

After winning at Murray Bridge last month, trainer Tony McEvoy decided to take him back to Melbourne and it returned a winning dividend.

Ridden by Luke Currie, Quaffany ($10) showed great fight to score a nose win from Like The Clappers ($8) with Ubin Thunderstruck ($6.50) a head away third in the Le Pine Funerals Benchmark 70 Handicap (2400m).

Currie settled the four-year-old midfield early but as the leaders chopped and changed, the gelding wound up in last spot approaching the home turn.

The jockey didn’t panic and pulled Quaffany out wide in the home straight and the gelding wound up to score a photo-finish win.

“He’s always shown ability but has taken a while to get it right,” McLeod said.

“This preparation, as he has been stepped up in distance, and been ridden quietly, has started to show his proper form.”

“Barend (Vorster) gave him a great ride last time and showed me being ridden that cold he was strong through the line.

“Speaking to Tony, on a heavy track and up to 2400 metres, we were really mindful early of just letting him settle, find his stride and see what he could do late.

“I thought he peaked with 50 metres to go when he got past the horse on his inside, then the one inside it came up and he gave a kick to win.

“It was a tough effort.

“He showed enough early but wasn’t ready to show his best on the track and was going to take a bit of time.

“Tony has trained him that way and got him out over a bit of distance, that’s his go and he really likes it.