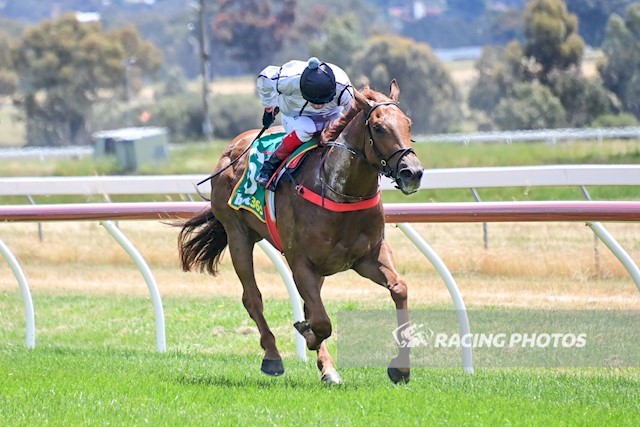 Trained by Tony & Calvin McEvoy, and ridden by Dean Yendall, Philosophers Stone bounded straight to the front at stall opening and was never headed.

Philosophers Stone had his rivals off the bit turning for home, got tired late, but had established a winning break.

The gelding debuted at Pakenham on May 31 but tired late to finish at the tail of the field.

He went for a break, was gelded, and resumed at Ararat in good order.

Rayan Moore, Racing Manager for McEvoy Mitchell Racing, was pleased for the ownership group with the victory of Philosophers Stone.

“It was a real gutsy win,” Moore said.

“He was all out on the line, but it was a good ride by Dean (Yendall).

“When you come to these sort of venues in the Wimmera, you put D Yendall on because he knows how to get them home.

“I would like to thank the ownership group led by Qatar Bloodstock and Miss Barbara Keller – they have been very patient owners and it is really rewarding to get a win here.”

Moore said there were no lofty heights with Philosophers Sone at this stage.

“We’ll just go through the grades and pick a few low hanging fruit.”

Winning jockey Dean Yendall was pleased to ride a winner for the McEvoys.

“Calvin was pretty upbeat and said he wasn’t a world beater but was expecting a forward showing today.

“He began cleanly out of the barriers and was able to dictate off a steady speed.

“I let him have a leisure gallop, just let him quicken from the 600 (metres).

“I didn’t have much in the tank but when I asked him to quicken he had enough to hold off the second horse.”