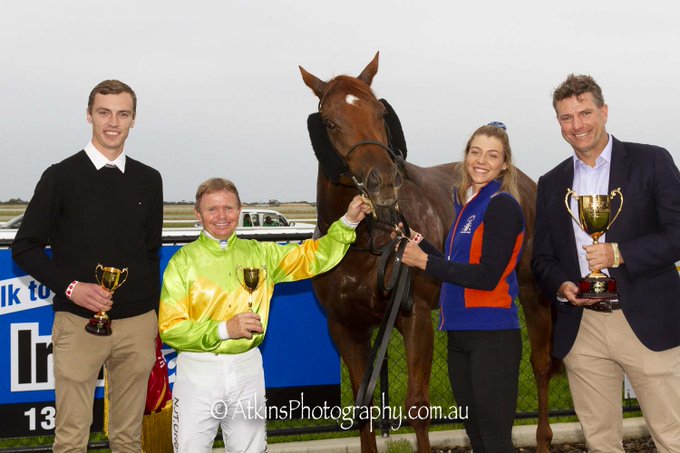 Winning Partner added to his Cups collection with a dominant win at Murray Bridge on Friday, October 16.

For trainers Tony & Calvin McEvoy, it was their second straight Murray Bridge Cup success following a win with Nistaan at the first running of the event last year at the new Gifford Hill track.

The win also brought up a race day double for the trainers and jockey Barend Vorster who won the opening event with Desired.

From his awkward draw, Winning Partner was caught three wide early but was able to get some cover midrace before Vorster pulled him out wide to challenge.

The runner-up had led and kicked for home 300 metres out but under Vorster’s urgings, Winning Partner quickly moved alongside then drew clear for an impressive victory.

Finn McCarthy, South Australian foreperson for McEvoy Mitchell Racing, said it had been a wonderful effort by Winning Partner.

“It was great to get another win with this fellow,” McCarthy said.

“He’s been very consistent this prep and going fantastic.

“He had a tricky draw to overcome, he was wide early then got a bit of cover going around the bend, and he was fantastic.

“It is a very fair track and there are not many hard luck stories and he was brilliant.

“He’s been up to the farm since winning at Balaklava to have a bit of a freshen up.

“He came back recently and has had a few gallops, working well and we were confident going in to today.”

McCarthy said Tony & Calvin would work out where to go with the gelding but most likely it would be in Melbourne.

“It’s not always you come across horses that you click and get along with,” Vorster said.

“This horse has travelled back and forth to Melbourne a bit but when I have been with him, he has been very successful and very honest.

“When I was going through the 600 (metres), he felt exactly as he did in his gallop in preparation for today.

“He galloped enormous and myself and Tony were smiling after his gallop.

“He was doing it so easy through the 600 and it was just a case of me letting him slide, let him down and he ran a really good race again today.

“It was always going to be a bit tricky from the gate, but I didn’t want to get too far back today.

“I began a little more positively and put him in the race but I was very happy when he got a bit of cover and I got a tow along and it was just a case of letting him slide.

“I got the right one this year so I’m very happy.”

Winning Partner is owned by Glenvallen Investments, managed by Mr. Li, in partnership with Seymour Bloodstock, managed by Darren Thomas, a Murray Bridge businessman who would have been delighted to win his hometown cup.