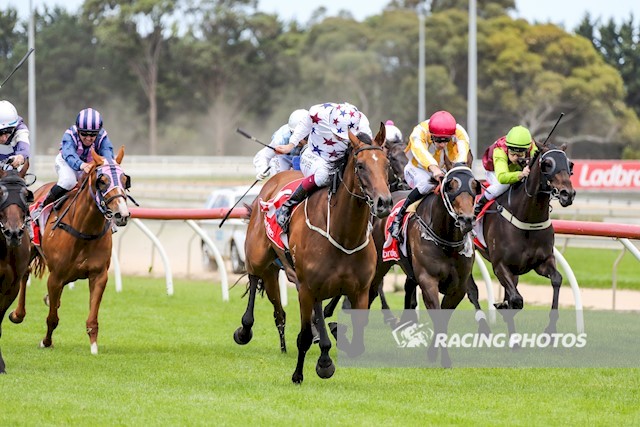 She might be by the same sire, Zoustar, and carry the colours of her more famous stablemate Sunlight, but Zoulah showed at Sale on Sunday, January 12, that she is her own thoroughbred.

Sunlight has made her mark as a sprinter but Zoulah indicated she wants more ground to do her best and was first up at 1623 metres in the Powered Solutions Fillies & Mares Maiden.

Starting a red-hot $1.90 favourite, the Tony & Calvin McEvoy-trained filly turned in a last-to-first performance to win by 1-1/2 lengths from The Cook ($4) with Let Chat Noir ($8), a length away third.

Zoulah was ridden by Regan Bayliss and he returned a perfect ride.

The filly made her debut over 1400 metres at Morphettville in July last year and finished midfield but was given a break after that run.

She prepared for today’s race with an unplaced trial over 850m at Tatura in December.

Darren Mcleod, Flemington foreperson for the McEvoys, was delighted with the victory.

“It was a very nice win,” Mcleod said.

“She didn’t show a whole lot of early speed which is why she was at the ‘mile’, she didn’t want to be run off her legs.

“She finished it off really nicely, it was good to see.

“Early days we did hold high hopes for Zoulah.

“She tapered off a bit and has been a real work in progress mentally.

“Camille, her strapper, has done a brilliant job as a track rider with her.

“It has been a lot of work with her every day and the penny is finally starting to drop.

“Blinkers might sharpen her up even further and there might be a bit of upside with her.”

Winning jockey Regan Bayliss was impressed by the victory.

“It was good for Tony & Calvin to give me this opportunity today and she won nice enough,” Bayliss said.

“She is not as speedy as another filly (Sunlight) which races in these colours.

“But she is a lovely big filly, has a massive big stride, and is very clean winded.

“She switched off beautifully at the back today and when I asked her to chime into the race she did so accordingly.

“She put them away nice enough.”