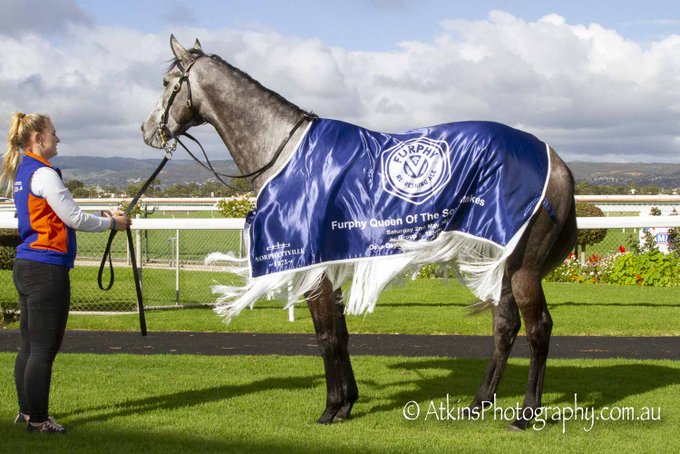 Prominent South Australian owner-breeder Peter Katelanis proved himself a good judge when talented mare Shrouded In Mist scored a thrilling win in the Group 2 $175,000 Furphy Queen Of The South Stakes at Morphettville (1600m) on Saturday, May 2.

Katelanis instructed co-trainers Tony & Calvin McEvoy to run Shrouded In Mist in the South Australian feature and suggested the mare be ridden forward to give her a chance of victory.

The mare began only fairly from her outside gate of 12 but Vorster allowed to strike forward and take the lead and rated her perfectly.

When the challengers presented in the home straight, Shrouded In Mist was responding to Vorster’s riding and at no stage looked like surrendering her advantage.

Trainer Tony McEvoy admitted he had not been expecting the win.

“I’m a bit surprised, I didn’t really think this mare was in the right form,” McEvoy said.

“I’ve got to say a big thank you to my co-trainer, my other co-trainer Peter Katelanis, the owner of this mare.

“Peter was very keen to run in this race, but I didn’t believe she had the form to go to this race and I was a bit keen to runner her in a lesser race today.

“But he was very strong, and I thank him very much now.

“He was also keen to put her forward in the race and we went to the stewards, and even though she didn’t jump keenly, Barend went on with that and she got quite an easy lead.

“It was a good effort.

“She has previously run third in a Balak (Balaklava) Cup. She is a pretty good mare and we’ve kept targeting these races because Peter is a breeder.

“Now for her to win this Group 2 race, the noise you can hear is the champagne corks popping in Peter’s house.

“It was so nice to get this one up when we weren’t quite expecting it.”

Shrouded In Mist now has six wins and as many placings from 29 starts earning $321,725 in stakes.