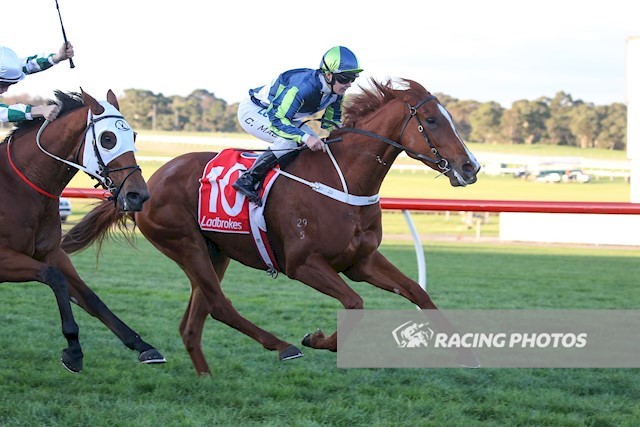 Trainer Tony McEvoy combined with apprentice Chelsea Macfarlane for a winning double at Sandown Hillside on Wednesday, May 15 when the talented Aristocratic Miss scored a strong win in the Ladbrokes Odds Boost Benchmark 70 Handicap (1300m).

The pair had won the previous event with Despacito and both wins were achieved with similar rides.

Aristocratic Miss, backed from as much as $4 to start $2.80 favourite, got back in the field before running home strongly inside runners to score a half-length win from Holy Command ($5.50) with Moet Rose ($4.60) a head away third.

Trainer Tony McEvoy said he was impressed with the ride of Macfarlane, who turned 23 earlier in the week.

“I like the way she positions horses in the run, and she is very strong,” McEvoy said.

“On Aristocratic Miss, she got back a bit further than I thought from a good barrier.

“I told Chelsea to be patient and the filly was good enough with the light weight on her back – the 3kg claim was pretty significant.

“She is a filly with a pretty good form line although she hasn’t won often but she is starting to work it out.

“Dwayne Dunn has ridden the filly a few times and when these high-class riders say something you certainly listen.

“He said this filly only has a 300-metre sprint so we kept this in mind, and I mentioned it to Chelsea and said to count to 10 if you can.

“I love having Thommo (Darren Thomas of Seymour Bloodstock) on my team and I have also got Darren Mcleod who works for me in the ownership.

“Darren is in a few of my horses, he is an astute judge, watches them go through the yearling sales and tells me which ones he wants to be in.”

For Macfarlane, the win provided her first metropolitan double.

“The filly wants to over-race and they told me that,” Macfarlane said.

“She was making it a bit hard for me but at the business end she was perfect.

“She certainly is a talented filly.”