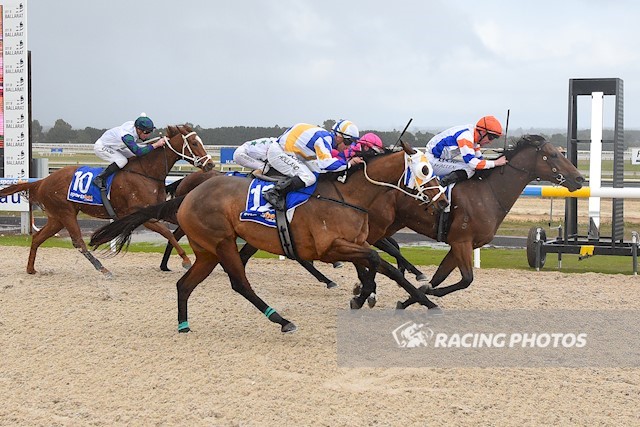 Trainer Tony McEvoy celebrated his most successful season with McEvoy Mitchell Racing when Espadeiro won on the Ballarat Synthetic track on Monday, May 27.

With two months of the racing season left, McEvoy has the opportunity to set an impressive record.

Espadeiro has been a steady improver since coming into McEvoy’s stable earlier this year.

McEvoy said he was still learning about the three-year-old.

“While he didn’t jump that well, John put him a bit closer to the lead today,” McEvoy said.

“John gave him a beautiful trip and he had his chance to win.

“He got to the front a long way out and got a little bit lost.

“He might need blinkers or winkers later on this fellow, but I thought it was a nice solid performance and he has got a good race in him down the track.”

McEvoy said the gelding had worked like a Saturday-class performer and he was certain there was improvement to come with racing.

Winning jockey John Allen said the race had been run in cold, wet and windy conditions.

“He probably got to the front a bit too early,” Allen said.

“He waited for them a little bit but fought back strongly when they came to him, so it was a good win.

“He was the right horse in the right race today.”