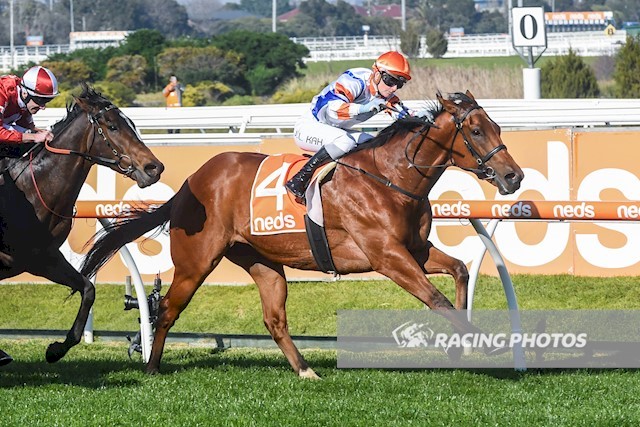 Kah became the first jockey to record 100 wins in Melbourne in a racing season leading throughout on the McEvoy-trained Deep Speed in the Neds Filter Form Handicap (1100m).

Deep Speed began well from gate nine and Kah eased the three-year-old across to take the lead and tried to get away with an easy sectional in the run to home turn.

The gelding ($2.90 fav) bounded away in home straight, but being first up, got tired late holdfing on to score by a head from the fast finishing All Of Brighton ($4.40) with Sacred Palace ($10), a similar margin away third.

While the star jockey got her racing education as an apprentice from South Australian trainer and former boss John Macmillan, the McEvoys had the horsepower to help propel her to three state premierships.

“They’ve been such big supporters of my career,“ Kah said.

“We’ve had lots of arguments and disagreements on the way through, but they’ve supported me from day one and to get it on their horse is very special.”

Kah’s “go-to” jockey association with the McEvoys ended in late 2018 – a precursor to her move to Melbourne where she has become the city’s most sought-after jockey.

Despite riding only seldomly for the dual-state the father-son team, the combination has maintained a brilliant 27.3 per cent strike rate winners to runners.

“Jamie Kah is not just a champion of the turf, but one of the best Australian athletes of all time,” McEvoy said.

“Anyone who didn’t believe Kah was already a champion must do so now.

“She was there before this, in my view.

“I think that says it all.”

McEvoy and Kah formed an amazing record over in South Australia together, collecting 65 winners from 222 rides in 15 months before she headed to Melbourne.

“She was riding very successfully when I got her. And I chased her because I could see the talent … not only I, everyone was talking about how good she was. I had the opportunity to grab her and I did,” he said.

“She was a tremendous asset to me. And I knew very quickly I wasn’t going to hold her for long because she was going to outgrow South Australia.”