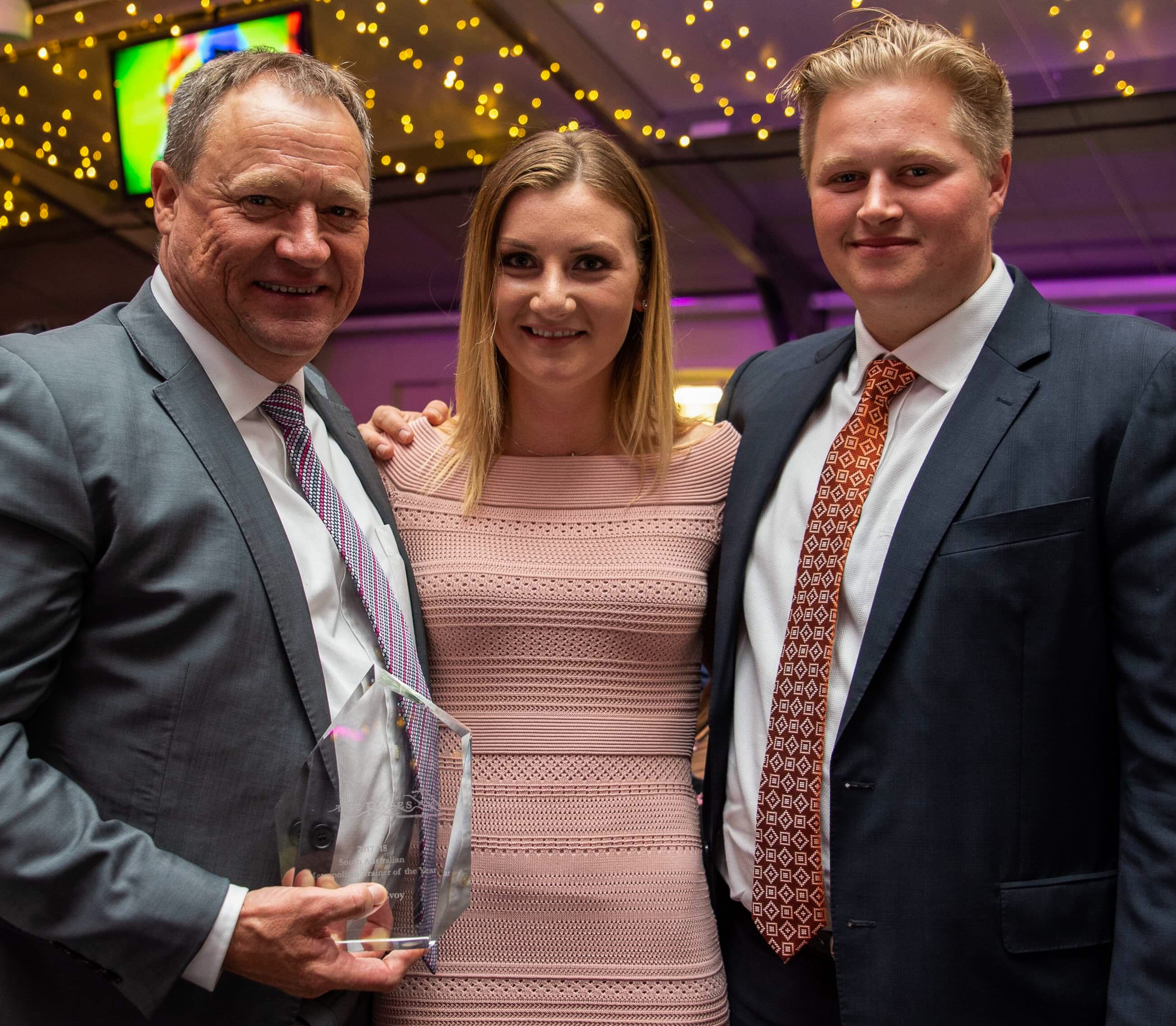 Champion trainer Tony McEvoy took out his second C S Hayes award on Saturday night at the 2017-2018 season presentations by Thoroughbred Racing South Australia at Morphettville racecourse.
The C S Hayes award is awarded to South Australia’s Trainer Of The Year and McEvoy admitted it was very special.
“I am so happy that when I came from Streaky Bay to join Colin Hayes at Lindsay Park in the late 1970’s that something inside me made certain I listened to and absorbed the advice the Boss gave me,” McEvoy said.
“His training regime is the base for current McEvoy Mitchell Racing model.
“When I first won the C S Hayes award as premier SA trainer in season 2012-2013 I was quite honoured to accept the prize named after my mentor. This year was even a bit more special as I was able to share it with my son Calvin in his first year as assistant trainer.”
Following a record-breaking season where he trained 141 winners around Australia, McEvoy also collected the award as South Australia’s leading metropolitan trainer.
All up, it was McEvoy’s seventh South Australian training premiership having won four while in charge of Lindsay Park, and now three with McEvoy Mitchell Racing.
The trainer also acknowledged he had achieved a personal goal and stated his aim for season 2018-2019.
“I set myself to make the list of Australia’s top 10 trainers last season and I came in 9th but what made me even happier was that the stable had a winning strike rate of 22.2% which was the best of any of the top 10.
“Realistically, I will never be able to reach the records of the top four because of their horse numbers, but my goal for this season is to climb higher in the top 10 and ideally finish fifth.
“With a month of the new season gone I have been happy with our start to be in sixth spot but with an excellent winning percentage of 34.4%.
“I have to thank all the owners who put their faith in me and the McEvoy Mitchell model to get the best results from purchases. It is a growing list and I thank everyone for the opportunity to train a stable of wonderful thoroughbred athletes.”
McEvoy said the stable’s awards were a credit to the staff at McEvoy Mitchell Racing.
“From the people on the farm at Murbko on the River Murray, to everyone at our Flemington stable, and of course the Kildalton Park team at Angaston – everyone has been a significant contributor to our success,” McEvoy said.

“Also all the jockeys, with Jamie Kah having a wonderful season in South Australia along with Jason Holder while Luke Currie headed the Victorian group.
“I thank everyone for their work to our success and most of all, the support of my wife Jo.
“Season 2017-2018 was a wonderful result for McEvoy Mitchell Racing, but has now given us a benchmark to better in 2018-2019.”