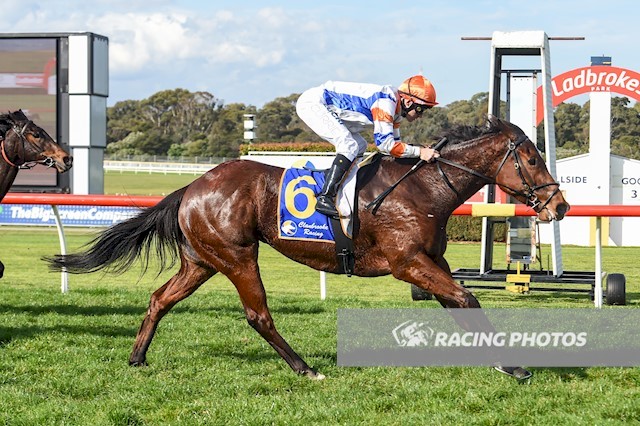 In victory, Lassiter made it a Sandown double for the new training partnership of Tony and Calvin McEvoy on their first day, as well as jockey Luke Currie.

Melbourne stable foreman Michael Shepherdson was super impressed with Lassiter which made it three wins from as many starts.

“What a return, that was a big win,” Shepherdson said.

“She’s got so much to come, she is still quite wintry in the coat, but showed today what talent she has.

“Luke was very patient on her, produced her late and she was quite strong through the line.

“It’s been delicate with her, bit by bit, and she’s progressing nicely.

“She’s been quirky in the past and we have just had to be patient with her, and we are being rewarded.

“We’ve got a handful of the progeny of the stallion Rothesay; we really like them, and they are under-rated in our view.”

“She is a nice filly and way too good for them today,” Currie said.

“I thought 1000 metres today might be a bit short of her best trip.

“She comes back under you early but has a really good turn of foot like she picked those horses up today.

“I was only half-heartedly going at her and she gobbled them up quickly.

“She had a bit of a look around late but did it so easily.

“That turn of speed it handy to have because, as a jockey, it is good to know there will be something there when you ask for it.

“It is a credit to the entire McEvoy team.

“Everyone works hard from the Melbourne stable to the Adelaide stable, all over, it is a credit to the whole staff.”