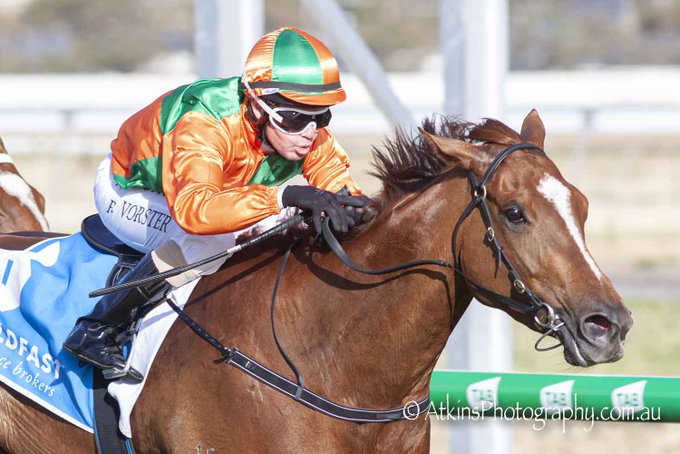 The victory brought up a treble at the meeting for trainers Tony and Calvin McEvoy who had won earlier with The Pugilist and The Natural.

For jockey Barend Vorster it was a double following his win on The Natural.

A drifter from $3 to $5, Jentico was always prominent before drawing clear for a three-quarter length win from Enough Swagger ($8.50) with Tongsai Boss ($2.50 fav) a head away third.

Vorster had the four-year-old mare away swiftly to lead early but was happy to take a sit when another runner came out wide seeking the front.

On the home turn, Jentico came off the fence, quickly gathered in the leader and withstood all challenges to win well.

It was her fourth win from just eight starts, and she is proving a smart racemare for her owner-breeder Lauriston Thoroughbred Farm in Victoria.

“It was a great ride by Barend,” McEvoy said.

“First up, this girl was really good over 1200 metres.

“A fortnight between runs and up to 1400 metres today, she was really good -it was a fantastic result.

“We weren’t quite sure what to expect up against some hardened, tough opposition but she put herself there and was really strong late.

“We actually bought her back from Victoria for this Happy Trails Series, they are a good iniaitive, it has worked out really well.

Again, I need to thank the team at home for their work to enable us to have a treble today.”

It was a good way to end the day for Vorster who had to rush to the airport to catch a plane for Singapore to ride at Sunday’s Gold Cup meeting.