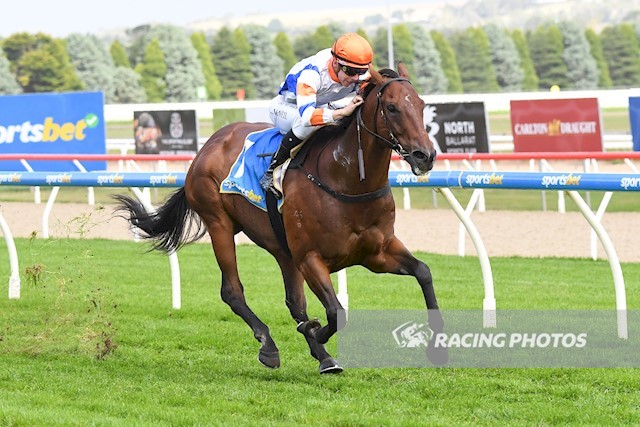 Hypersonic again demonstrated his first-up prowess with an all-the-way win at Ballarat on Tuesday, March 8.

Having his first run for 10 months, the Tony & Calvin McEvoy-trained five-year-old scored comfortably in the Sportsbet Bet With Mates Benchmark 64 Handicap (1100m).

Ridden by apprentice Logan McNeil, it was the gelding’s third first up win from four preparations.

Beginning smartly, Hypersonic held the inside sharing the lead approaching the home turn before McNeil eased the gelding away from the inside then asked him to lengthen and he dashed away to win easily.

“Unfortunately, we have battled soreness all the way through with him.

“He’s had a long time off and actually we started him off on the heavy sand this preparation, so it seems to have done him the world of good.

“I thought he would run well today but improve as he is a big, gross horse.

“It was fantastic for the owners who have had to be patient.

“He got left out there and gave a really nice kick.

“He had never won beyond 1000 metres before today.

“It was the right race, and with the claim.

“He will certainly improve.

“We went back to basics with him with a few gear changes.

“He’s been clean winded in all his work, so we went back to basics, it is simple as that.”

McEvoy said the stable had always had a big opinion of Hypersonic.

“We took this horse to the Gold Coast as a two-year-old.

“We tried to get him into the Magic Millions, he had so much talent.

“He nearly got there, trialled up really well but unfortunately went a little bit sore.

“He’s never really reached the potential we know he has got.

“Hopefully, by giving him plenty of time, we might get rewarded.”

“He’s got a bit of speed but did all the work himself early.

“Coming around the bend we wanted to steer clear from the inside a bit.

“He gave a really nice kick, he was just too strong through the line.

“He will definitely take improvement from the run, fitness wise, so he will take great benefit.”