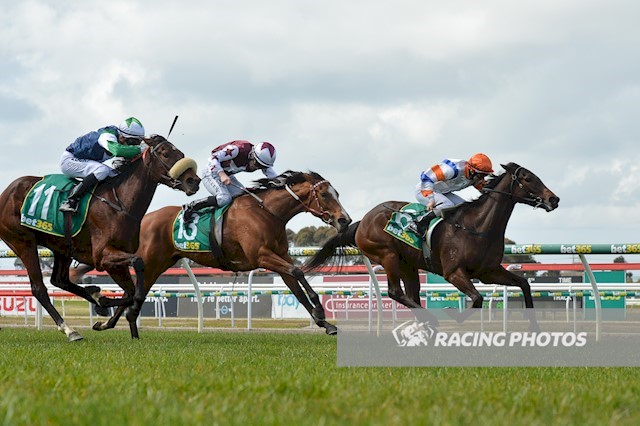 Trainer Tony McEvoy’s talented three-year-old filly In Heart’s Wake showed great courage to score her initial win at Geelong on Sunday, September 2.
First up from a spell and racing on a soft track, In Heart’s Wake was left in front 300 metres from home but showed courage to hold off her rivals.
Solid in the market a $5, In Heart’s Wake, ridden by Luke Currie, scored a head win from Sadente ($16) with Stripping Royalty ($5), a head away third in the IGA Liquor Maiden (1312m).
Victorian stable foreman Michael Shepherdson said the win had been excellent.
“We thought she had done enough work for today but first up at 1300m and on a soft track she was a bit vulnerable,” Shepherdson said.
“Her form last time in work was behind Tequila Time, arguably the best two-year-old in South Australia last season so she was well placed today but with that query on the track.
“It was a solid performance and I’m sure Tony will find suitable races for her this preperation.”
Winning jockey Luke Currie was very impressed.
“I had a good sit on the leader (Medieval Miss) which I thought was the one to beat,” Currie said.
“So I was happy to be alongside her turning for home but she dropped off quickly and let us in front a bit before I would have liked.
“I felt about 200 metres out that she was waiting for the rest of the field and when the placegetters came she found to win.
“I’m sure there are bigger things in store for her,” he said.