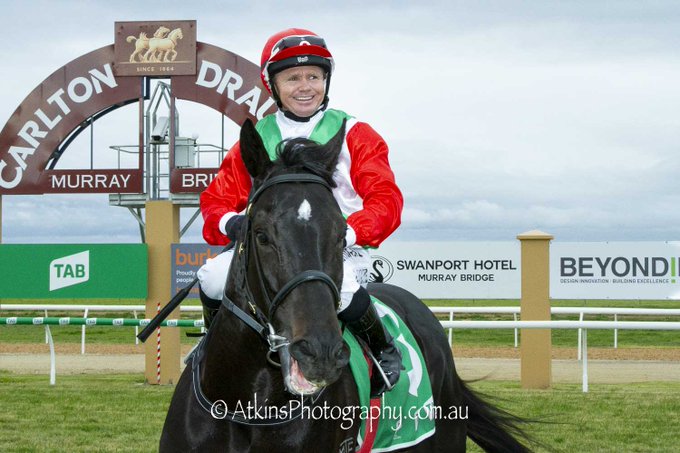 There is no hiding the fact that Eluding looks a three-year-old of promise with a convincing victory at Murray Bridge on Saturday, June 13.

Given the run of the race by Barend Vorster, Eluding eluded his rivals over the final stages to win the TAB Benchmark 66 Handicap (1600m).

The win brought up a Murray Bridge treble for the McEvoys who won the opening event with Mayameen then also scored by Dimaggio. It was a double for Vorster.

Eluding worked home strongly last Saturday at Morphettville Parks over 1300 metres running third and the stable had no hesitation backing him up over the extra distance a week later.

After jumping well, Vorster allowed the three-year-old to sit third on the fence in running before angling into the running line turning for home.

Eluding quickly accelerated to the lead and won comfortably.

“He is a beautiful horse by Toronado,” McEvoy said.

Well done to the owners Laurel Oak Bloodstock and their partners, who have been very patient.

“He bounced off the track last week after that run.

“It was another textbook ride by Barend.

“He mapped to be where he settled and had a beautiful run, took the split and he was too good.

“Eluding is another nice young horse with a lot of upside.”

“I thought he would be a bit sharper last week over the 1300 (metres).

“However, he showed he was looking for that little bit of extra ground and it happened there was a 1600 metre race seven days later.

“He is our first horse with the Laurel Oak Bloodstock group, and it has been a great experience.

“When he was a young horse he had a foot abscess which went on for a long time.

“Like I said, they had to be patient, but I think he will start repaying them now.