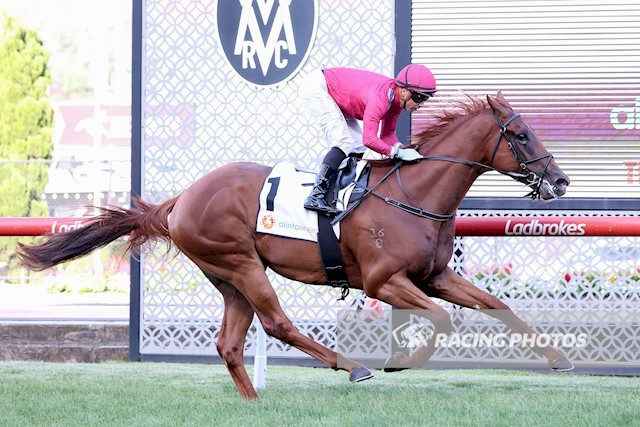 Elite Icon indicated he is a three-year-old with potential thrashing his rivals at Moonee Valley on Friday, February 4.

Heavily backed from $2 into $1.70 favourite, the Tony & Calvin McEvoy-trained gelding led throughout in the Alinta Energy Plate (1200m).

Ridden by Dean Holland, Elite Icon jumped quickly to find the lead then dashed away in the home straight to win by 4-1/4 lengths from Suparazi ($6.50) with Shootoose ($25), three-quarters of a length away third.

Having just his second start, the son of Nicconi wobbled a bit of on the home turn but once in the straight bounded away.

Trainer Calvin McEvoy was a little relieved to see Elite Icon win like he did.

“We went to Flemington on debut fairly confident when he ran second,” McEvoy said.

“He’s a really nice horse that we have had a lot of time for.

“I bought him here on Monday morning and he just wobbled around out wide and really didn’t gallop well.

“He was really short in the market, and I still don’t think he handled the Valley well.

“I thought Dean rode him well and used his experience and he won very well.”

McEvoy said the stable would take Elite Icon through his grades.

“It is a really good ownership group headed by Suman Hedge, Rob Chapman, Dave Barham and Simon George are all involved.

“I would like to give a big shout out to the team at home, everyone has been working super hard – the whole team at Ballarat and Angaston, so it is good to get a result.”

Winning jockey Dean Holland said it had been an easy win on Elite Icon.

“He made my job very easy,” Holland said.

“He left the machine really quick, and they gave me options.

“I could have gone back and sat off one, but he is very well educated and has a gentle mouth.

“I could have come back but he was doing it that easy I took him to the front, and he was never in doubt.

“He still a big baby and on the way to the gate had a good look at the crowd and I think he did it again on the home turn.

“I was really solid on him to teach him to get through the line.

“If he can run a bit further, he will be a really smart horse.”