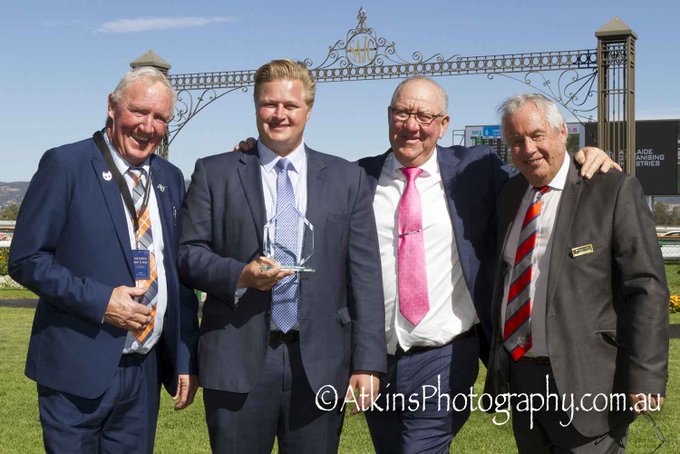 Backed from $3.80 into $2.40 favourite, Ef Troop, ridden by Barend Vorster, drew clear over the final stages of the South Australian summer feature sprint to score by 1-1/4 lengths from Zalmona ($21) with Miss Jane ($13)

The four-year-old began well and settled a clear third behind the two leaders who went out very quickly.

Vorster asked the gelding for a supreme effort in the home straight and he quickly picked up the leaders and drew clear to win well.

For the McEvoys it was a Morphettville double having won earlier with their first two-year-old Bribery while for Vorster it was his third winner on the way to landing four at the meeting.

“That was a great thrill for the whole stable that win,” McEvoy said.

“Full credit to John, Finn and the team and they were super confident going in to today.

“He’s such a beautiful horse and came to us in great order from Queensland.

“We took him to Ballarat and thought he would run well but nothing went right.

“He just didn’t show up, he didn’t travel and probably the first time of racing on this leg.”

“When those two horses went out and lead him quite comfortably it gave me a bit of confidence that they were going too fast.

“He was too good for them in the run home.

“It was a special win and thanks to the owners for giving us the opportunity.”

For jockey Barend Vorster it was another feature win in nine months with the McEvoy stable since coming down from Singapore and he was thrilled with the result.

“At home he shown us everything that you ask from a good quality galloper,” Vorster said.

“We’ve done a lot of work to get him to relax and his work has been superb coming into today.

“I’m happy for the connections who have transferred him to Tony to try and get him to step into some nice races.

“Today was about getting him back into form and I’m so happy for the connections.

“They ran really quick down the back and he was actually changing legs a few times trying to keep himself balanced.

“I was just trying to ride my horse and ignore the front two and he got to them nice and comfortable but what I enjoyed was when I asked him the question he just kept on kicking.

“It’s always nice when you get a new horse, do a bit of work with them and see them produce on race day.”

Ef Troop had a good career as a juvenile and ran fourth behind the champion McEvoy-trained mare Sunlight in the Magic Millions.

His record now is an impressive four wins ands four placings for stakes of $446,175.