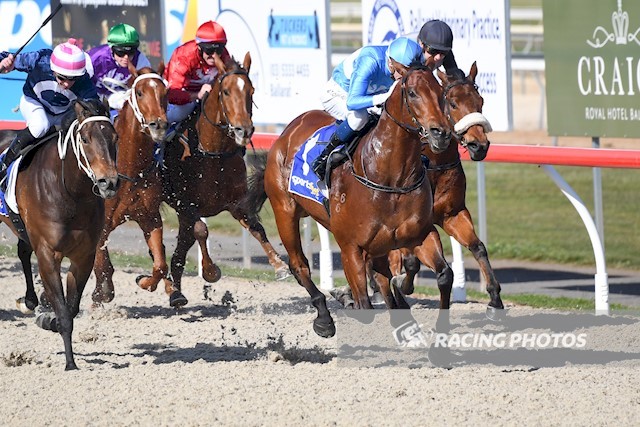 The well-named Dimaggio hit a home run for connections with an impressive maiden win at Ballarat on Monday, May 18.

Trained by Tony & Calvin McEvoy, the three-year-old was having only his second race start.

“He showed us a lot from day one,” McEvoy said.

“But he’s a big horse and took some time to put it together.

“We took him to the races as a two-year-old in May last year, but he got it all wrong, so we turned him out and let him grow into himself.”

McEvoy said Dimaggio had galloped well in preparation for his return to racing today and he had expected a win.

“The field stood in the gates for a while and he was a little flat footed when the gates opened.

“Michael had him in a good spot and produced him at just the right time from midfield.

“It can be a bit hard to make ground on the polytrack at Ballarat, but he lengthened beautifully and put the leaders away easily.

“The runner-up came at him late but Dimaggio had a kick and won impressively.”

McEvoy said he would talk the gelding’s program over with his dad Tony but there was a chance he could return to Adelaide.

“I’m sure he would be well placed in Saturday company in Adelaide now the carnival is over. Another option would be a midweek in Melbourne.

“I have no doubt he will continue to improve with racing.”

By the outstanding sire Deep Field, Dimaggio is named after American baseball legend Joe Dimaggio who hit many a home run over deep fields in American’s baseball parks during his career.