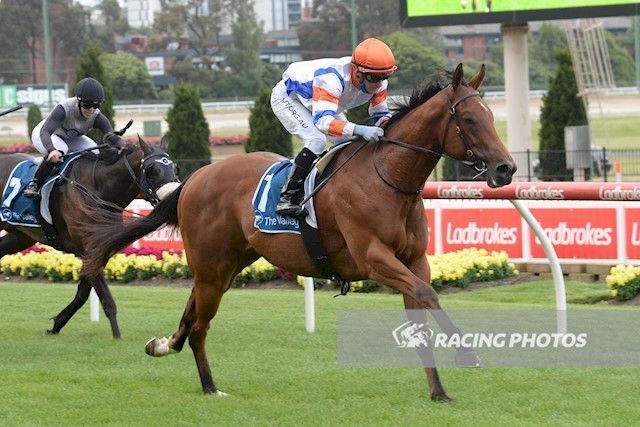 Promising three-year-old Deep Speed made it two wins from two starts with an impressive victory at Moonee Valley on Friday, October 30.

Backed from an early quote of $2.40 into $1.60 favourite, Deep Speed led throughout in the In Memory – Vin Dreschler Benchmark 64 Three-Year-Old Handicap (1200m).

The Tony & Calvin McEvoy-trained gelding, ridden by Luke Currie, scored by two lengths from Show Some Decorum ($3.60) with Redneck Princess ($11), a length away third.

After beginning nicely from his outside gate, Currie urged Deep Speed forward to find the lead and from there was able to dictate the tempo.

The big horse was asked to lengthen in the home straight, and despite looking around, found the line strongly to win comfortably.

“It was a really good win,” McEvoy said.

“He was very green out there and probably never really got into top gear.

“I want to thank the owners, the Streaky Bay boys, Mal and Campbell Brown, there is a big group of great owners.

“They have had to be really patient with this horse.

“He was a $1.80 favourite for the Maribyrnong 12 months ago and knocked himself on the way down to the gates and didn’t run.

“He is just a big boy and took a lot of growing and was getting growing pains and these guys have been super patient.

“There are big things in store for him.

“That wouldn’t have taken anything out of him tonight and there is a nice little stakes race eight days’ time at Flemington on the last day that we might give consideration.”

McEvoy said he believed Deep Speed would eventually love 1400 metres but being so fast thought 1600 metres might be a touch too far.

“But tonight was exciting and it was great to get him in the winner’s stall again.”

Deep Speed made his debut with a win at Morphettville on October 10 and the stable had no hesitation in switching him to Melbourne for tonight’s Moonee Valley race.