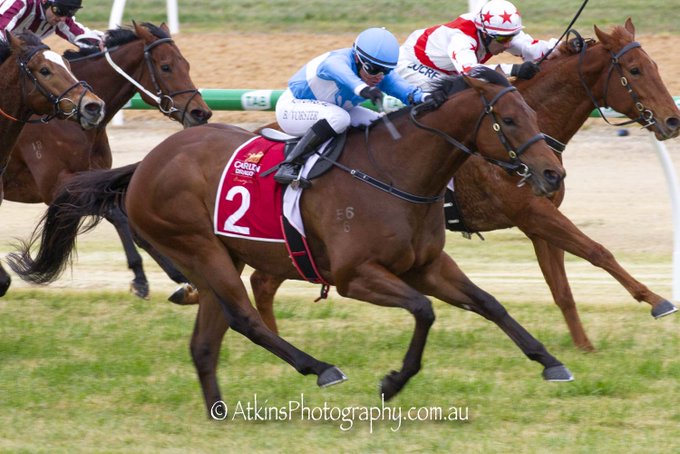 A perfect start saw Dimaggio smash another home run for connections with an impressive win at Murray Bridge on Saturday, June 13.

Dimaggio, ridden confidently by Barend Vorster, brought up a Murray Bridge double for trainers Tony & Calvin McEvoy who had won the opening event with Mayameen.

After a maiden win at Ballarat on May 18, the trainers brought the three-year-old to Kildalton Park, Angaston and lined him up at Morphettville on May 30 but he missed the start by three lengths before charging home to finish second.

At Murray Bridge, Dimaggio ($3 into $2.50 fav) jumped beautifully and the gelding was three wide just off the speed on settling down in the Bridges Event Centre Benchmark 66 Handicap (1000m).

In the home straight, the gelding took a while to warm up but once he did charged home to score by a length from Calypso Reign ($5.50) with Magno ($7) a head away third.

Trainer Calvin McEvoy thanked the staff at Angaston for their work to see Dimaggio have good barrier manners.

“We’ve done a bit of work with him and the team has done a great job,” McEvoy said.

“Finn, Matt and Josh and all the boys at work have done a good job with the horse through the week.

“He was much better today and really pinged out.

“Barend showed his experience to be caught wide but didn’t panic.

“The way the track is playing, and it is windy, so it was a pretty tough win.

“He was gritty today and has a lot of upside.

“We kept him at the 1000 (metres) but I think he will certainly get better over a bit more ground.”

McEvoy said Dimaggio had a break of 12 months after his initial run.

“There were no real issues, he was just growing.

“If you look at him, he is a big strong boy who had a big growth spurt.

“He was immature in his bones, and credit to the owners they gave him time and he is going to reward them.

“The way he raced today it was a tough win and even better than it looked.”