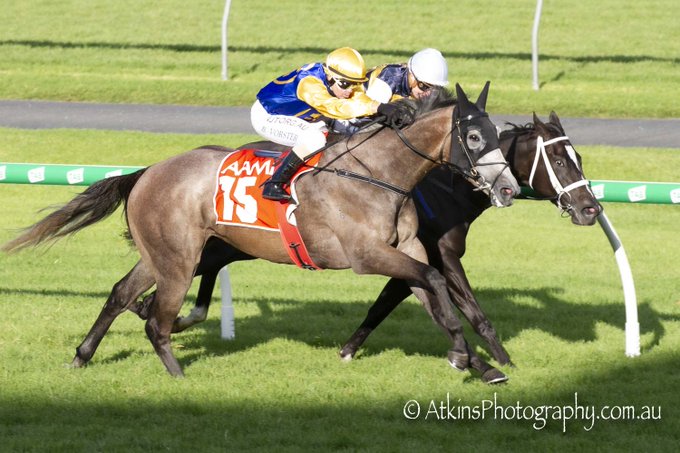 Nonagenarian Donald Moyle experienced one of his biggest thrills in thoroughbred racing when Silent Sovereign scored a strong victory in the Group 3 Schweppervescence Stakes (1800m) Morphettville on Saturday, April 18.

Moyle, 91, bred and part owns Silent Sovereign, which is trained by Tony & Calvin McEvoy and was ridden by Barend Vorster.

A $12 chance, Silent Sovereign atoned for any unlucky first-up fourth with a half-length black type victory from Selica ($11) with Walking Flying ($26), 1-3/4 lengths away third.

Vorster had the filly a little bit better than midfield in the field of 16 and brought her will a well-timed run in the home straight.

Trainer Tony McEvoy was delighted to ring Moyle who had to watch the race at home with his daughter Libby because of the Covid 19 ban which stops spectators from attending race meetings.

Moyle was a grazier all his life, but when he turned 80, he decided to become involved in thoroughbred racing and had good success with a mare called Silent Surround, which is the dam of Silent Sovereign.

When the mare was retired, he selected the stallion Dalakhani, which was standing at Cornerstone Stud, Angaston, for the mating and Silent Sovereign is the result, and she is now a black type winner.

McEvoy expected the filly to be extremely competitive after running well first up recently in the Laelia Stakes.

“She was really good,” McEvoy said.

“She was first up at the mile and I said to Barend (Vorster) we don’t want to get into a speed battle first up.

“There was a lot of pressure early and he didn’t want to dig up to hold his spot.

“He ended up getting the backwash and got too far back.

“With that run under her belt I said to Barend today to put her into the race today with that fitness.

“He gave her a beautiful trip, and gee, she was strong second up, really strong to the line.

“It was great for Don to breed a stakes winner and she will go on to the Oaks now, and she will be very competitive.”